PEOPLE MUST KNOW WHAT WE STAND FOR 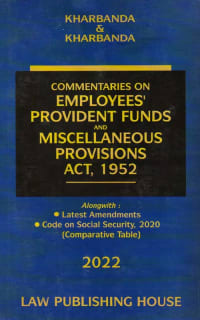 Employees’ Provident Funds and Miscellaneous Provisions Act, 1952, is part of a Swathe of of labour legislations enacted in the early years of India’s democracy to provide them some sort of social security after their retirement. In India the importance of welfare legislations, especially in the field of labour laws cannot be overemphasized. This is proved by the high number of instances in which the Employees’ Provident Funds and Miscellaneous Provisions Act, 1952 is invoked and the number of cases delivered by the various courts in the country which are continuously interpreting the provisions of the Act in newer light and newer contexts.

This book is an exhaustive and very well received commentary on one of the most important Labour Legislation in the country. The edition also contains latest Amendments and Notifications in a separate Chapter for quick and easy reference and comparitive lable of provisions of Social Secutiry Code 2020.

Commentaries On Payment of Gratuity Act, 1972