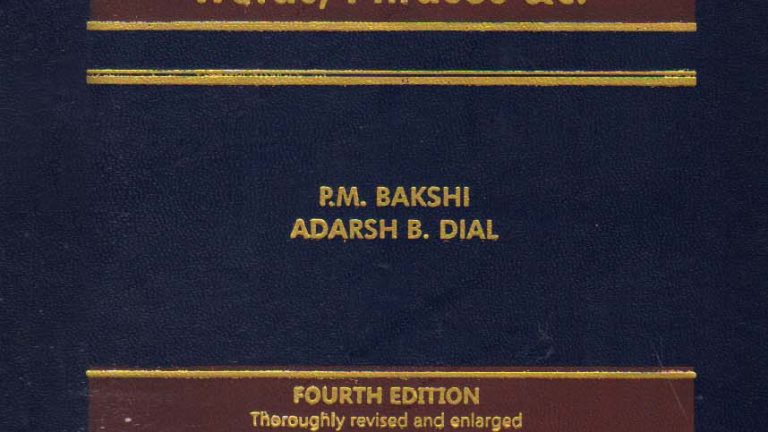 Supreme Court has highlighted the importance of Legal Maxims as being the guiding principles for both the judges as well as the advocates’ fraternity. Legal Maxims are very often referred to and relied upon by the Supreme Court and High Courts. They are replete with wisdom of American, English and Indian judges. Maxims are principles and authorities, and part of the general custom or common law of the land; and are of the same strength as Acts of Parliament, when the judges have determined with is a maxim; which belongs to the judges, and not a jury.

The Fourth edition, has been prepared with same novel features, such as, inclusion of about 200 more Legal Maxims collected from various sources, incorporation of case law from 2018 to 2022 enriching the content of the book further. Almost all cases of the Supreme Court and selected leading cases of High Courts have been incorporated. In this edition, case names have also been added. Index to the Maxims has been corrected. A Table of Cases has also been given wherever names of cases were available. List of Abbreviations has been corrected and updated.

The Maxims, Words, Phrases, &C., are arranged in their alphabetical order. Maxims which embody the leading principles of law and which are of frequent occurrence are printed in antique type. The work is, in the first instance, intended for the use of students who frequently comes across Latin maxims and phrases in the courts of their study which is a comprehensive and exhaustive collection Legal Maxims and Latin, Frinch ad Roamn terms.

P.M. Bakshi and Adarsh B. Dial

If you feel good, you work good – Relationships lead to Results

P.M. Bakshi and Adarsh B. Dial

49% of Employees Frustrated by tech tools provided at workplace: Study

Chalking out mental wellbeing plan for the new world work

Employee Wellness is key to the post-pandemic workplace

Skills you need to make inroads into the BFSI sector