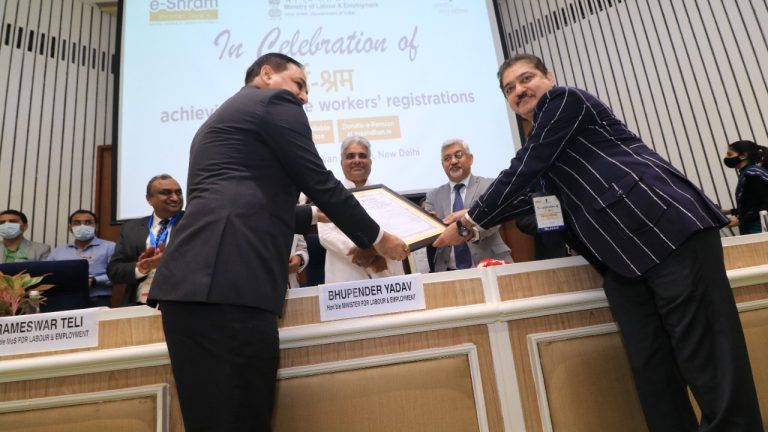 The Delhi Government was awarded the second prize in Union Territories achieving their targets for E-Shram registrations. Delhi had set its target as 52,19,018 registrations, of which it achieved 31,11,605 – 59.39% of its goal.

Among other States/ UTs, Delhi was felicitated with e-Shram Award .The award was received by Labour Commissioner and Special Commissioner (Labour).

As per statistics there are approximately 52.39 lakh unorganized workers in Delhi and so far 31,41,279 have been registered on the portal. District wise registration is as under:

The Labour Department through meetings and banners will apprise the trade union/ workers and unorganized registered workers, the  benefits of these schemes .  The Delhi Building and  Other Construction Workers Welfare Board will organize special camps for registration and renewal of construction workers.

During this period the District Heads of Labour Department will convene meetings of PE/contractors, factory owners & Trade Associations/ Unions persuading their construction and other workers to enroll themselves in the above mentioned schemes and banners will be displayed at prominent Labour chowks and markets  high lighting the features and benefits of these schemes.

55% women did not file complaint against sexual harassment: WICCI Council of Ethics Survey