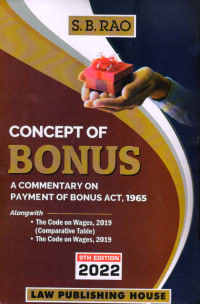 The Payment of Bonus Act, 1965 is one amongst a host of labour law legislations in India which were enacted to give employees various benefits and safeguard their rights. The concept of bonus originated from the argument that both capital and labour contribute to the prosperity of an establishment and therefore equity requires that workmen should also be given a share in the profits of the industry. In a country like India the importance of welfare legislations, especially in the field of labour laws cannot be over emphasized. This is proved by the high number of instances in which the Payment of Bonus Act is invoked and the number of cases delivered by the various Courts in the country which are continuously interpreting the provisions of the Act is newer light and newer contexts.

This book contains cases till December, 2018 from the major labour laws journals of the country and also contains the Rules and Regulations such as the Payment of Bonus Rules, 1975.

It was due to this increase in the number of cases on the Payment of Bonus Act and the various interpretations given by these cases as well as amendments in light of India’s recent push towards a more digital economy, that the authors felt the need to revise and update this book- Concept of Bonus with the latest case laws and amendments. This book contains cases till December, 2018 from the major labour laws journals of the country and also contains the Rules and Regulations such as the Payment of Bonus Rules, 1975.

This book will be extremely useful for Employers, Employees, Trade Unions, Lawyers, Industrial Tribunals, Labour Courts and all those dealing with concerned with Labour Laws and will serve its patrons well. Any suggestions for the improvement of this book would be greatly welcome.